For those that don't know what the DOM is - it's the Depth of Market. Before we proceed, it's important to point out that not all DOM's are equal. Some are too basic to be of any practical use and some freeze up when you need them most - when the markets get really busy.

Here's the Jigsaw DOM and an overview of some of the key features, we'll first walk you through what's on the DOM and then look at how it's used. 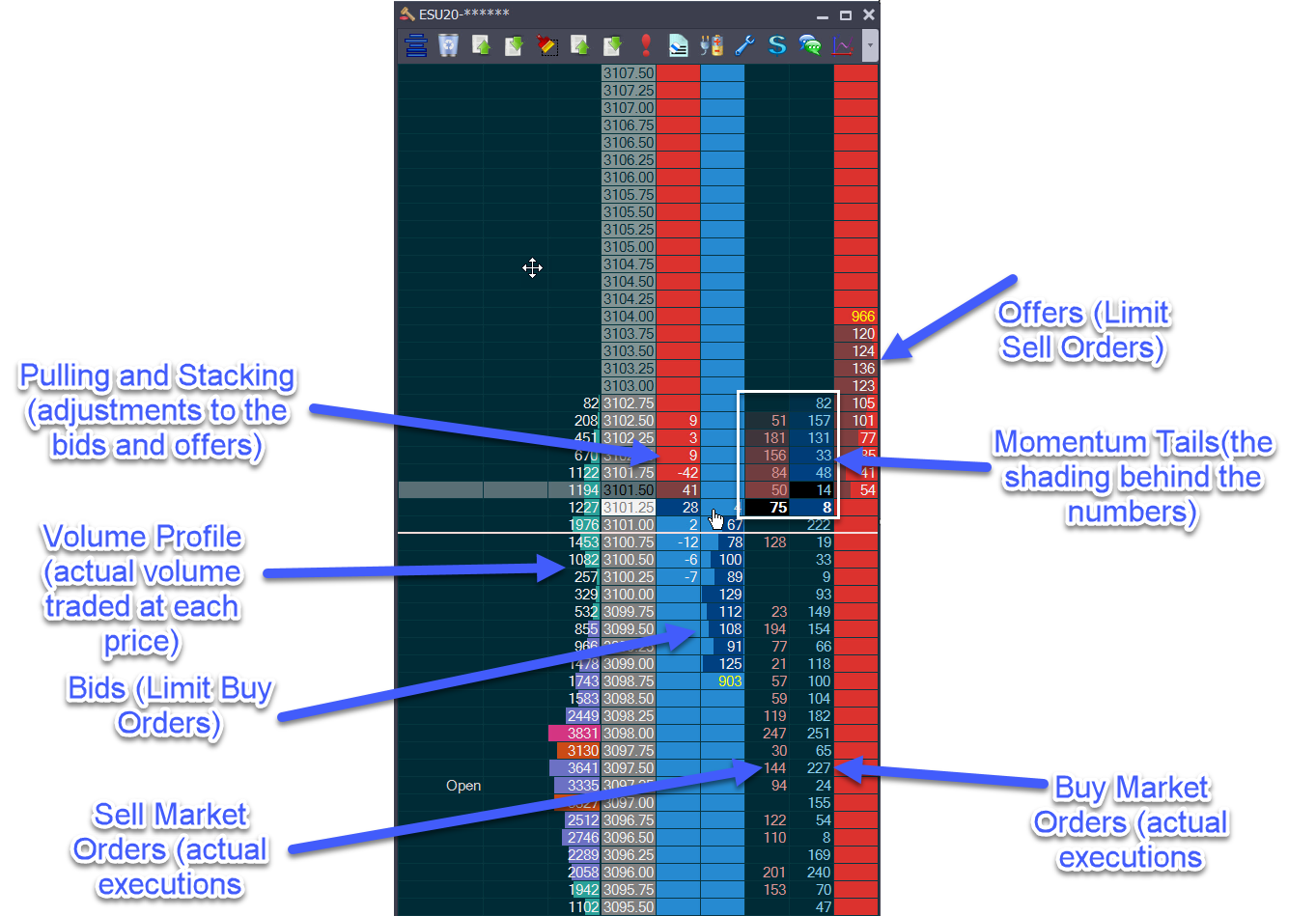 Many people look at this and say "there's too many numbers" - but the professional traders that trade off the DOM aren't paying attention to every number. It's more about the flow, how it's moving than the numbers themselves. Some features are just used at certain times - for proprietary trading firms trading Futures, this is where they start their intern traders as they know it's the fastest route to success. We'll see why shortly but first, let's run through the different components.

Before we look at what does work - let's consider what doesn't work, as well as the most important thing you need with any trade setup - the "Why". So if you buy something, it's because you think it will go up. You need to know why other traders would buy after you buy. If you have no why, it's likely because you've got the strategy from somebody who doesn't know how to trade and there's a lot of that about. A good example of a "why" is a market moving up, which then turns into a short term range. If you trade a breakout to the upside, the "why" is as follows:

So here's what doesn't work:

And here's what does work:

With order flow, you can get in with a little confirmation or a lot. You pay for additional confirmation with a slightly worse entry price - which is absolutely fine. There are many, many DOM based setups but it's all about trading them in context. If your market has been in a 15 point range all week with successive inside days, you don't want to be taking directional trades in the middle of that. It's clear the market is undecided.

News is important too - I have a lot of traders say to me "I don't want to trade the news" and I always ask them "So, how will you stop news happening when you trade?". And the answer is obvious - you can't. If momentum suddenly hits the market - and you know it's news driven, you play the move in a different way.

With most trading (not including Market Making), traders are looking for an event that will cause a reaction. They do not care about the win rates. If the event occurs (like traders getting stopped out when a range breaks), you get a fast, directional move which often will continue. If the event doesn't occur, it's a lazy drop back into the range. With these types of setups - you could have a 20% win rate and break even. It's all about cause and effect. And you get to see the cause and the effect play out on the DOM. When the move starts to fade because traders aren't hitting the market as aggressively, then that's the sign to get out.

So the rules are:

And for those of you that love Fibonacci - I do not mean to offend. There are of hundreds of techniques being taught out there that come without explanation or rationale as to why it would have an effect. I had to choose one.