First of all - Happy New Year. I don't consider it New Year for trading till well into week 2 as it's often low on volume (and I also like an excuse to extend the vacation). January is typically a tight month where a lot of people are paying for the Christmas and New Year excess but it's also a month to which many people attach a lot of hope. Setting a New Years Resolution and then somehow blowing that out the window with a single point of failure and then back to the old bad habits.

The New Year should not be set up as a line in the sand, which when crossed means any good intentions get binned. So if you gave up drinking on Jan 1st and had a tipple on the 5th, that doesn't mean you should now spend the rest of the year totally blasted. The New Year "line in the sand" is completely artificial. Pats on the back for good days are much better for you than jumping off a cliff after a single screw up..

I spent a lot of 1 on 1 time with traders in 2019 and it seems that the biggest issue we dealt with was going off plan. I don't mean the odd one or two trades, I mean completely off the rails for a day. We've discussed this in webinars before. Previously, when I'd start working with people, we'd start to look at technique first, to quantify the edge, then move on to the application part. Now, I don't bother with that, we start with what they have now (or a cut down version if there's too many setups) and just see if they can stick to it. In 90% of cases, people cannot stick to a set of rules for a straight run of 5 trading sessions. It's fascinating and frustrating, to some I've recommended going for NLP/CBT sessions because they cannot align their behavior to their goals.

Of course, I might just be attracting people that have this issue and the real percentage of people that cannot be consistent is much lower. If you can't be consistent for 5 days without trying random trades because you think you are missing out on some big home run, then it doesn't really matter how good your trading method is the rest of the time.  So my message to those of you struggling is to start the year seeing if you can follow your own plan, regardless of how good or bad you think it is. Don't implement a new plan - just see if you can follow any plan.

I talk to a lot of traders and I don't see any issue that's defeating as many traders right now.

Obviously the New Year started off with a bang - or several bangs - in Iraq. It's also an election year, so we can expect the news cycle to keep the volatility high. For 2020, situational awareness is key. For those that ignore the news in trading at the moment, I'd take a 1-2-3 approach

Start with step 1 in January, step 2 in February, Step 3 in March and you'll suddenly have benefited from becoming more and more at one with how the news impacts the markets through the session and this year - it really will. 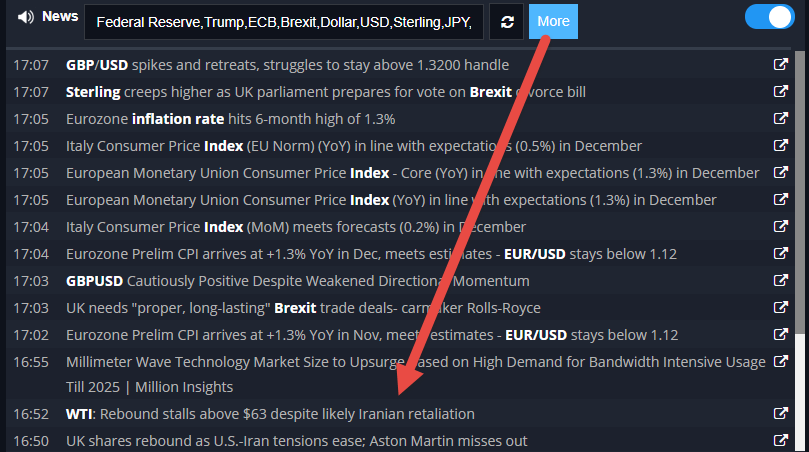 And of course - news often just disappoints. They will be calling $80 oil one day and then not a week later say that oil has "failed" or "stalled"... So don't kick off 2020 as "News Trading" as your new magic bullet.

From what I can see - the single market trader is still not going to fare as well as those that follow techniques across multiple markets. With this 'news addicted' mode we are in, the markets tend to slow down with there's an absence of news. 5 years ago, you'd have fairly predictable volatility based on the time of year and the economic announcements in the week. That's not really the case at the moment. It doesn't mean it's changed forever, just means it's not the mode we are in. Momentum moves seem the most obvious plays and different news is going to drive people into different markets. Breakout plays seem more risky, especially breaks from ranges where the range represent lack of interest.

Boredom seems to a big factor in 2019. Not every day was tradeable but many people traded every day anyway. Even with professional day traders, they don't know with 100% certainty that there's nothing on the table many days till they've engaged and lost some money. That's fine. What a lot of traders did last year was "not get the message". When the market was telling them there was no interest, they made some initial losses and then tried to turn that around to end the day on top. The results were quite disastrous. If there's no money coming into the market and all that's happening is the market is shuffling around, then there's really not much opportunity. So scaling up to make up for losses on a day like that. Well - it only has one possible outcome. So the flip side of all this news-driven volatility is - we can have sudden days where nothing is on the table. It's not like a few years back where volatility would cycle up and down over weeks. It's constant change.

To anyone stuck on SIM, I'd have a long think about moving to micros. They are quite limited in coverage, there's not many of them still. There's a lot of traders that have become immune to any benefits of SIM trading and I think some consideration should be given to having a bit more skin in the game. Micros let us do that but as I say - there's only a limited number of them, so it's by no means perfect and for 2020 it probably means more days where there's no trade on versus a year on SIM.

Inconsistency was a big issue in 2019 but I was much closer to a number of traders than I usually am. Inconsistent behavior, and inconsistent markets. More of the same in 2020 from what I can see and as a trader, I'd recommend tackling that first and then moving on to the next improvement. Don't give yourself a "Get Rich or Die Tryin" January - but look to nail your ability to behave like a professional and then focus on the next major improvement. One thing at a time as you go through the year. Write down where you are now with your trading and update every month. If you hit many months where nothing improved - you really need to have a good think about whether you need to make changes gradually.

May you all have a profitable New Year.

Which Trading Education is Best For Me?