Trade Mentorship - Making Improvements In All The Right Places

There's an interesting couple of lessons I'd like to share from Nathan, a trade mentorship student. About where he found the answers to really improving. Like a lot of traders, Nathan was stuck in a rut with his trading. His story is common. He's been looking at trading for about 7 years. He did what most people do at the start - get ripped off by a shady education outfit. Then he started studying chart patterns and price action but nothing was consistent & there were way too many variables. He finally found John Grady at No BS Day Trading who introduced him to Jigsaw. He felt he was in the right place but couldn't get himself past a number of issues, so he signed up for a trade mentorship. Here's his own words about his issues:

It's been an interesting journey with Nathan because while his perceived problems were indeed correct, there were a few other problems we identified at the start of the trade mentorship too:

The first step was a validation of his setups. It would be a bit hard to help someone that was trading off moon phases and horoscopes! We got him into a routine for understanding the drivers of a trading day and then we hooked him up to Journalytix, so we could see where he was at and figure out where to focus (Click on the image for full size):

What you can see there, is he's so averse to losing, he'll just add to a position until it comes good or he's lost a few million on SIM. Both the winning and losing days with the big numbers there are all days where he scaled into big positions to avoid loss. So both the losing and winning days with big numbers are a symptom of that. No point showing the detail as it's no prettier!

Now let's take a look at where he is today (trading since our last call on 14th October to 11th November, say of writing this article): 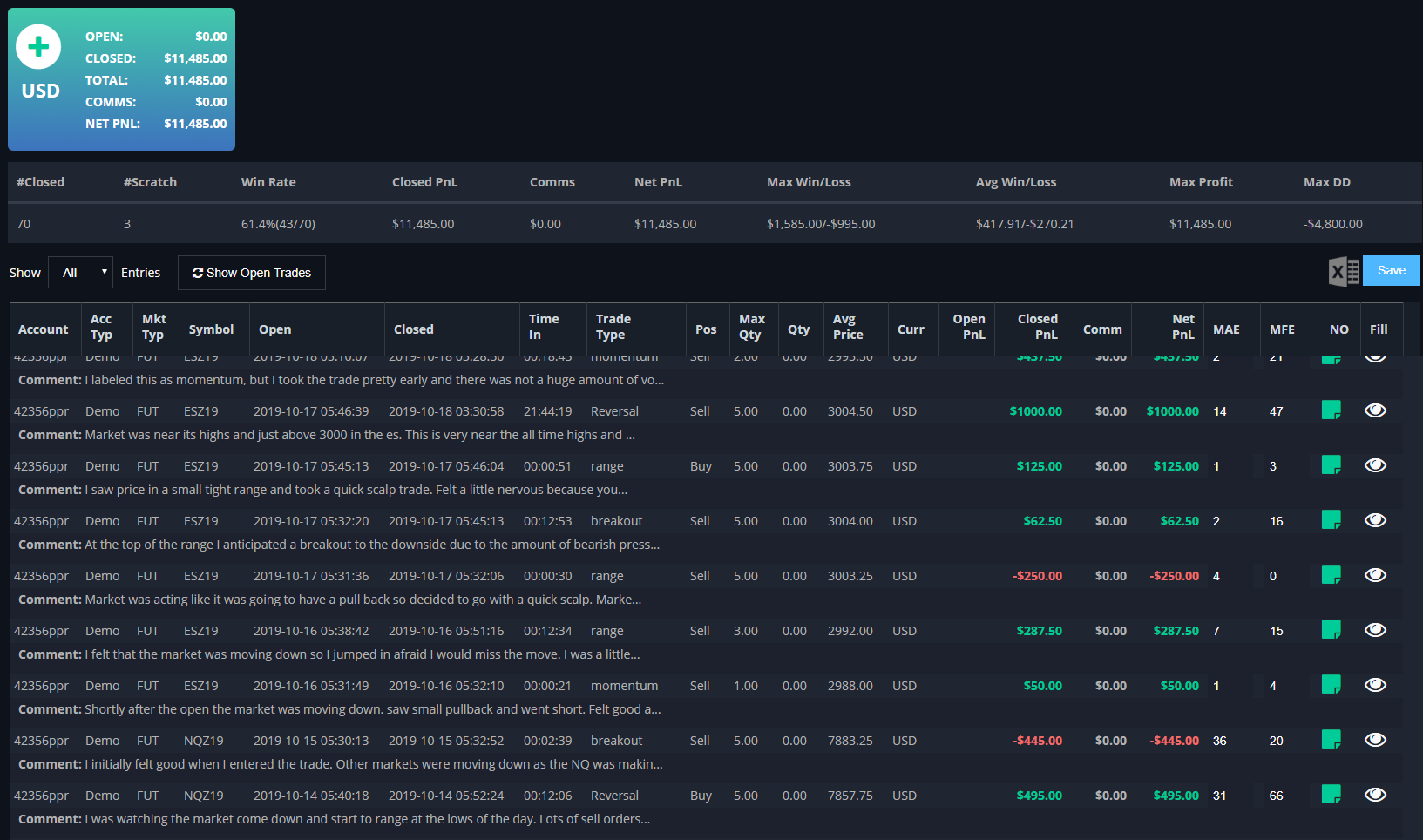 The key things to note here:

It's still a work in progress but the improvements are solid. Perhaps the most surprising thing is that he hasn't changed his trading setups. He's being more selective with them, he's considering what's happening in the overall markets, he's having a mental reset between trades.

One of the things that is frustrating when you work with a retail trader is that they always believe that the setup is the issue with their trading. That they need a better one or that they can only focus on setup until they are happy with the results and then they'll look at other things. The truth is that there's a number of things you need to develop in parallel and when you have that figured out, you'll be able to kickstart your progress. Without it, you just end up so focused on the setup, that the other skills you should be developing are put aside. Working on your discipline, your awareness of what's driving the market, knowing when NOT to trade. Setups come and go but these skills are needed every trading day.

Next steps for Nathan are to go live on Micros, it's up to him when he does that. Here's an excerpt from our chat on the topic, it raises a few interesting points about how these Micro contracts give the retailer a potential edge over a prop trader going live for the first time.

I'll leave you with a few words from Nathan himself on the Trade Mentorship process:

I have been trying to teach myself how to trade for years without real consistent success. Don’t get me wrong, I am a lot better then I was when I first started, but over the years I created some bad habits that are going to keep me from being able to take trading to the next level. I have been stuck in a loop doing the same things over and over and never improving. I needed to do something different, I needed to change something. I had always gotten a lot of good information from watching Peter’s Jigsaw Trading videos, so when an opening in his trade mentorship program came up I jumped at the opportunity. I am very happy that I did. We have only been meeting for a short time but I have already seen a real improvement with my trading. What has been good for me is that Peter didn’t ask me to totally change my style of trading and completely start over from scratch. He is working with my style of trading and having me make minor changes week to week. These little changes have helped break some of my bad habits and have started to building a better foundation in which to build on. I am excited to continue my process with Peter and look forward to our meetings. For the first time in a long time I am starting to see the light at the end of the tunnel. I truly believe that with a bit more hard work and Peters guidance I will be able to become a consistently profitable trader.