MBO - The new Holy Grail or A Gimmick for Retail Traders?

There's building chatter and excitement in the retail trading world about "MBO". or "Market By Order". In this article, we'll take a look at what MBO is and the potential ramifications for the retail trader. Note that a lot of the discussions I had with professionals about MBO were taking place after it was announced/before it was released. It all sounded very familiar...

First though, an explanation for those that don't know what MBO is. On a regular price ladder, what you are seeing is now being coined "MBP" or "Market By Price". 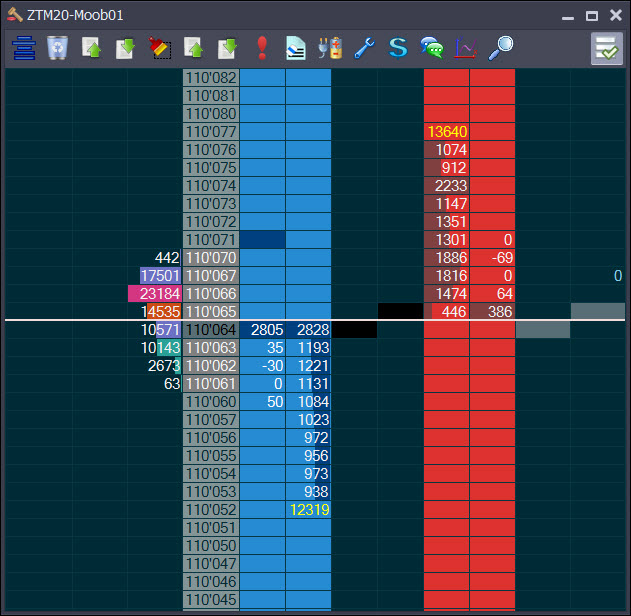 As this is MBP, the data feed sends us the total number of limit orders at each price. Very simple.

The MBO feed sends EVERY limit order at each price. So if the 2828 at 110'064 above consists of 282x10 lot orders and an 8 lot orders - MBO sends them all. It also sends us all of the updates to those limit orders.

Tantalizingly, this includes new orders added through exchange-side iceberg orders. An iceberg is an order that displays a certain amount (e.g. 500) and then keeps topping up the order as people trade into it. This allows you to only show a certain amount of size when really you want to buy/sell much more. Many exchanges support "exchange side" iceberg orders, it is the exchange side that manages adding the orders. Institutional trading platforms also have the ability to manage icebergs with the management handled on servers co-located to the exchanges.

Who is MBO For?

Now, before you get too excited about all this. First of all, let's just consider one thing:

Did the CME release MBO so that their smallest customers (us at home) can make money from it's biggest customers?

After all, the CEO of the CME recently said that "his exchange is not for retail investors".

I think the answer to that one should be pretty clear. It's no secret that HFT participation is way down since its peak in 2010. It's attraction for investors has dulled and like any new industry, the first few players cleaned up and then competition made it a much less rewarding activity.

What MBO does, is give algorithmic traders richer information to understand their fills - or more importantly, why they AREN'T getting filled. No point bidding the market in a great location if you never get filled, right?

So before you get too excited about MBO, just bear in mind that it's not there for Joe Retail trading at home but to give rich information to a specific group of institutional participants, including much needed Market Makers. Now - let's ask another question:

Is it possible that a bunch of tools vendors will jump on MBO, claim it's the secret sauce and sell you useless new tools claiming they help you "Beat the Algos"?

The discussions I had with professional traders about this were mostly centered around the similarity this has with something that died out long ago. It was felt that the game in question was mostly played out. That any potential benefits would be short lived before people made themselves invisible, just like they did previously.

Basically, MBO is not new.  I was using it in the early 2000's when it looked like this:

This is level 2. It shows all orders, per market maker/ECN per price. The codes are Market Maker IDs or ECNs. Orders through Archipelago exchange would simply appear as "ARCA" or "ARCX" - to be honest, it's so long ago it's a bit of a blur.  Just to pick a few there off the top of my head. JPMS - JP Morgan Stanley, NITE - Knight Capital, GSCO - Goldman Sachs, MSCO - Morgan Stanley, MADF - Bernie Madoff (before jail).

You'd be trading a stock, then Goldman would come in big on the bid side, the market would pop up and then next thing you know Goldman would be on the offer sucking up all the buying. It was a big old game until the mid 2000's - when they all disappeared. There was no technology change behind this. All these guys simply stopped trading as themselves and started routing their orders through an ECN. Presumably the rise of HFTs was behind them all disappearing. For a while though, they totally gamed the markets. Then they all disappeared. Game Over.

With MBO, a lot of vendors are presuming this sort of game can be played again. That the 'big boys' will start gaming their size and the retailer will be able to guess when it's a bluff or double-bluff and take advantage of it. The reality is that we'll be able to see whatever orders participants want us to see. My guess though - there will be a lot of hiding, except on non FIFO markets where queue position is awarded based on order size. My take is this:

If you aren't making money now, I don't think this is the answer.

This change was announced well ahead of time and it's clearly being described as an aid to algorithmic traders to understand their fills. Anyone that wants to hide their size will likely have already done what's necessary, by switching to co-located vs exchange icebergs as well as using the normal order splitting algos used to split large orders. It's not the early-2000's any more.

There's some other worrying downsides with MBO:

On our side, we will not change the way we detect icebergs. There's no point in being able to accurately detect some icebergs if it's going to miss those placed in a different way. What's important with icebergs is:

We will however, enhance the way we show icebergs.

There will of course be many tools popping up with promises of riches from MBO. There will be people touting it as the solution to all your troubles, getting you to focus on more minutiae of trading data, taking you away from the bigger picture.

As you see the rise of MBO as "the next big thing" over the next 12 months, bear in mind that the biggest institutional trading platform has had the tools to split and hide complex order types for years.

"Trading Season" - What to look out for in the coming months

Trade Journaling: When Will You Need It?