The crazy volatility we saw at the end of 2018 in the US Index Futures appears to be behind us. The China Trade War drums aren't beating so hard and we've become (almost) immune to the daily ups and downs of Brexit news.

As such, I think it's time to consider a reversion back to the regular approach to trading the S&P. There are a few twists as we'll see below. First of all, the big picture. 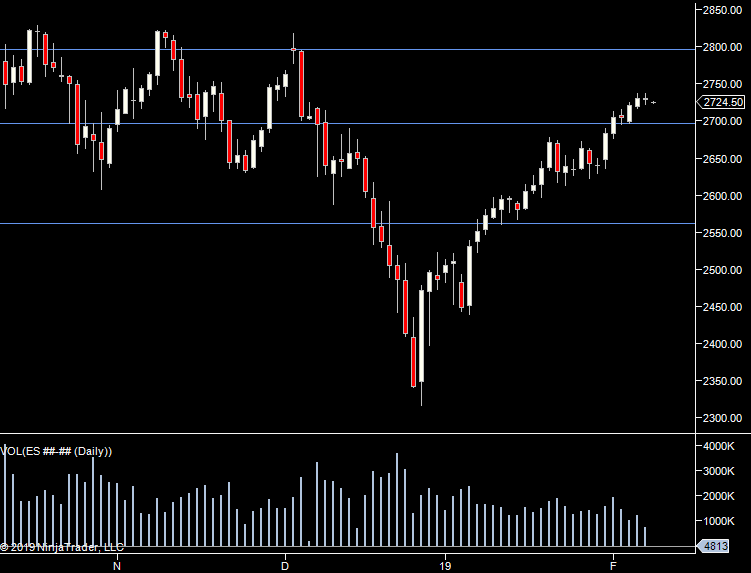 It's quite clear the volume and daily range has dropped, we aren't seeing so many massive range days. From a liquidity perspective, we are back in the hundreds. It's still a bit lighter than we'd like but it's no longer sweeping 8 ticks in an instant. So we don't need to be in 'instant decision' mode any more. There's time to make decisions. S&P is now less volatile than Crude again!

News is still coming in and hitting the market. Yesterday morning was a good example with the EU commenting that re-negotiations on Brexit were impossible. The knee-jerk reaction from the markets was both silly and predictable. Silly because this wasn't really news, it's pantomime. "Oh yes they will, oh no they won't". It's opportunism - it's not so much the market reacting and re-positioning for a new reality, it's traders selling in expectation of a larger sell off. Yesterdays move was not only short lived, it stopped just the other side of the range (volume-wise) and completely ran out of steam. It provided a fairly safe and easy to read opportunity for those wanting to trade the bounce back.

Imagine you'd been a seller on the way down, you'd participated in the massive volume traded on the way and you were still short. Then the market stops moving for a few minutes (worry), then it starts back ticking against you (worry a bit more)… What will you do? Stay in? Get out? Well, a lot of them got out and that's when we saw our counter move. The fact that overall volatility is much lower than December/early January is what gives us an easier trade in this scenario. The market is less likely to sweep against us, we have time to make a decision and risk:reward is on our side. We don't have to be right all the time but the upside of a bounce against all those sellers is much larger than the stop we need in case it continues down.

I'm suggesting that we revert to older S&P techniques but with a twist. We do still have too be wary of the wild moves. Liquidity isn't back where it was and the market is still in "knee-jerk" mode. It is feasible that we have liquidity pulled again on strong news. The characteristics of the wilder moves are that we see a big move in one direction BUT they are difficult to join without a lot of risk. On a move down, we can easily see a 10 tick counter move in a few seconds. So unless you want to suffer 'death of a thousand stops', you have to get in and sit through a decent move against you. For me, I stopped doing pre-market prep for these markets late last year as it had become irrelevant. The market was in reactive mode with no real rhyme or reason behind the moves. I made one other change at the time:

What we have here is my "alternate workspace" for trading indices. Going from left to right (just the DOM/Depth & Sales) we have DAX/Mini Dax, then EuroStoxx 50 (FESX), Bund (FGBL) and finally the eMini S&P500 on the right. It might look complex at first glance but here is the "why".

I put this workspace on a new monitor and I left it there until we had one of those wild moves. As long as Dax and Bund were lively, I took a position in Stoxx in the direction of the move on the S&P. The move on STOXX was much smaller but so were the counter moves. You didn't have to take the same kind of risk.. For sure, you didn't get the 'hero days' but considering the amount of traders that got wiped out in the past few months, you can keep them.

For now, I'm reverting back to my old 'style' and prep for the S&P500. I'm keeping this setup going on the extra monitor so I can switch modes if we see another wild day. I think it's also worth keeping the Eurex markets up for another couple of reasons.

Overall, the S&P seems to be much better behaved with much more volume per price as we move up and down. It's become a safe play once again but we can still expect volatility to peak as Brexit throws us curve-balls. If the S&P gets too hot, then Eurex is a safer bet.