Anatomy of a Reversal

A huge proportion of traders are focused on trading reversals. Usually, there is some method of setting levels at which a reversal may occur; Support & Resistance, value areas, volume profile, pivot points, Fibonacci are all commonly used methods of setting locations where a reversal may occur.
There is nothing inherently wrong with trading reversals, but it is worth considering WHY traders are attracted to reversal trading and what the downsides may be.

Why Trade a reversal?

Reversal trades are attractive for a number of reasons. If you trade a reversal, you stand to benefit from a larger move. A day trader may see a market moving down and attempt to buy the low of the day in the hope of selling at the high of that day. In that case, the whole daily range is the theoretical potential for that trade.  The stop loss on a reversal trade is usually obvious and visual. It’s just the other side of the reversal level.  So, it becomes an easy trade to handle visually. It seems like a more natural way to trade and manage those trades.

There are some downsides to trading reversals. First of all, the very nature of a reversal is that you are trading against momentum. It’s ‘easier’ for a market to carry on doing what it’s doing than it is for it to do something different.  Not all reversals are equal in this respect.  I like to consider reversals as major reversals and minor reversals. 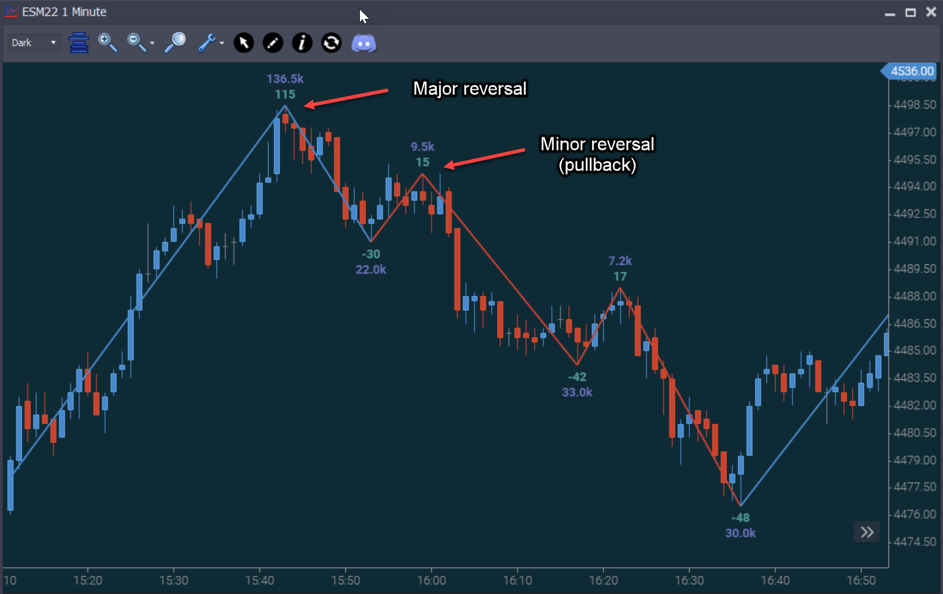 In Image 1, we have a high at 4498.50, I consider that to be a major reversal, that’s the point at which the market rolled over, and that price became the high of the day session. The minor reversals are the pullbacks on the way down.

All reversals have the same three elements that cause the reversal to occur from a mechanical perspective. Before we look at those elements, let’s consider how a minor and a major reversal differ:

The minor reversal trade is still trading on the side of overall sentiment. The mechanical elements that make the reversal occur are the same in both cases, but the minor reversal is less of a shift in behavior. That makes them easier to read.


Major reversal areas tend to be fairly well known. In fact, if your method of setting a major reversal price is ‘secret’ then it most certainly won’t work. You need to create price decision points at which a large number of traders will change their behavior. If other traders don’t have that price as a target or an entry point for a reversal trade, then the price will not reverse. Of course, if the area is well known, then it is more prone to being ‘gamed’. More likely that predatory traders will come in and start nudging price around to try and shake you out of a position. Those predatory traders may not be able to prevent the market from reversing, but in certain market conditions, they can push the market against the reversal for long enough and far enough to take out the stops that they know reside on the other side of that level.

By their very nature, the major reversals are noisier. They cannot be expected to reverse as cleanly. There may be pushing and shoving. Minor reversals, on the other hand, are relatively tame. There’s not so much gaming going on, they require smaller stops and are clearer to read. Major reversal traders will suffer more frequent losses because the nature of their trading is that they are trading against overall momentum.

The Elements of a Reversal

Any trader that wants to significantly improve the performance of their reversal trading needs to know how to look for these elements.  For the sake of simplicity, let’s consider a long to short reversal.

The market is moving up and buyers are dominant. Absorption occurs when buying continues to be dominant (market orders) but price no longer moves up. Sell-side liquidity/limit orders are absorbing the buying. In some cases, the limit orders are visible as we move towards the level but quite often, more limit orders are added as buyers trade at that level. This is what is known as an iceberg order.

In terms of being easy to spot, this element is the easiest. Absorption takes place over a decent amount of time, on thicker markets it can take many minutes. What it means is that the sell-side is stepping up and absorbing all the buying – buying is no longer able to move the market up and eventually, the buyers give up or run out of money. 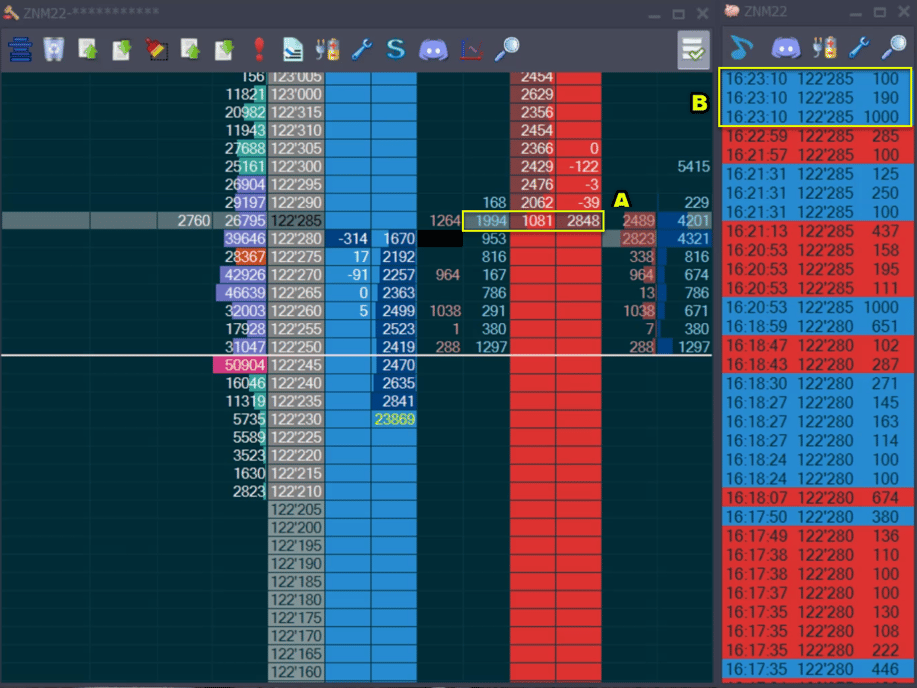 Image 2 shows a typical iceberg order. In yellow box A, we can see:

So, we can see that since we have been trading at the level, the number of limit orders displayed on the DOM was kept as buyers continue to buy.
In yellow box B, we can see that some very large traders were buying 122'285, but price didn’t move up at all. Those traders are trapped.

In some cases, you will be able to join the offers, but this really depends on the market, most of the time you’ll have to step in front of the offers. I, personally, would like to see one of the other elements in addition to this when trading a major reversal. For a minor reversal, I am quite happy to trade this as confirmation.

This is fairly easy to spot but you often don’t have the luxury of time as you do with absorption. Be aware too that markets do pause, so you need to be looking for buyers fading at a key level. There is a time element to this, it takes time for the buyers to realize no one is buying anymore – then they will start to unwind, and you’ll see the sellers come in.

Confirmation with Order Flow helps to keep you out of bad trades – but not all confirmation is equal in terms of entry price. With the buyer fade, you want to give the buyers a chance to come back and hit the market, so you wouldn’t want to get in 3 seconds after you see a small number of contracts traded. The best entries are when we come back to that same price and print even fewer contracts. Other times, the market will start moving down more quickly. Bear in mind that confirmation does give you a higher hit rate, you have to be prepared to give up a few ticks to get that confirmation on some occasions.

With this element, you get to a level where sellers start hitting aggressively with size.  Many times this will be after absorption or a buyer fade, but other times it just comes out of the blue with no warning.

You will most likely see the volume of sell market orders be 2-3 times the volume of buy market orders when this happens. This is hard to spot in a timely manner. In other words, by the time you spot it, the market will have ticked down 2-3 ticks. At that point, you can decide to get in at a “worse price” – effectively trading a good price for certainty. That doesn’t make it a poorer trade.

This isn’t rocket science, just common sense. These elements are not mutually exclusive; we expect most reversals to be a combination of one or more elements. For instance, the absorption and buyer fade are often followed by sellers jumping in after a short pause.  One or more elements will be present with any reversal. Now that you know what they are, you can look for them – either before OR after you enter a reversal trade.  There is no law today that says you must confirm trades before entry. You could put a resting order to sell at resistance and then look for the 3 elements of a reversal. If you don’t see them, you exit the trade.

My personal preference is to look for these elements and not enter until I see something confirming.